home / Resources / Midterm Review of the Afro–Colombian and Indigenous Program: A Synthesis of Findings

Midterm Review of the Afro–Colombian and Indigenous Program: A Synthesis of Findings 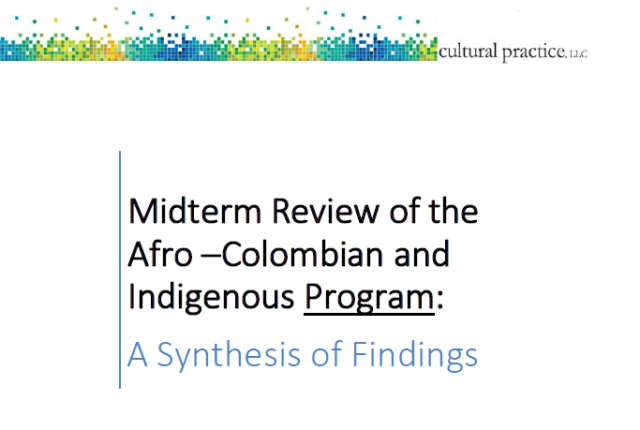 ACDI/VOCA hired Cultural Practice, LLC to conduct a mid-term review of the USAID Afro-Colombian and Indigenous Program in 2015.

Ethnic minority populations are among the most marginalized groups in Colombia and suffer from challenges including exclusion, inequality, poverty, violence, discrimination, and displacement.

To address these issues, USAID created the five-year Afro-Colombian and Indigenous Program (ACIP). Implemented by ACDI/VOCA, ACIP is a $61.4 million project that ran from August 30, 2011 to August 29, 2016. It is the first stand-alone program designed with the sole purpose of improving the socioeconomic and political inclusion of Afro-Colombian and indigenous persons by addressing political, social, economic and cultural exclusion.

This midterm review is meant as a synthesis of several different assessments that have been conducted recently to examine different aspects of the project. In addition the review incorporated information from quarterly reports and has examined trends in outcomes based on monitoring data over the last three years. Considering that two other separate assessments of ACIP were underway at the same time in Colombia, a gender assessment, undertaken by an independent consultant, and a midterm evaluation, conducted by the USAID/Colombia M&E contractor, this report was based on documentation research and analysis which did not contemplate a field verification of findings included in the reports and assessments reviewed.

As this is not a typical evaluation, the evaluations process focused on key themes that point to ACIP’s unique program characteristics that merit further investigation and documentation. The review identified three main themes that emerged from a review of the quarterly reports and the two evaluations upon which much of the report is based. Each theme crosscuts at least two results:
1. ACIP as a broker and convener of disparate partners
2. ACIP as a catalyst for leveraging public and private funds
3. ACIP’s focus on governance as a foundation of communal and territorial land title formalization