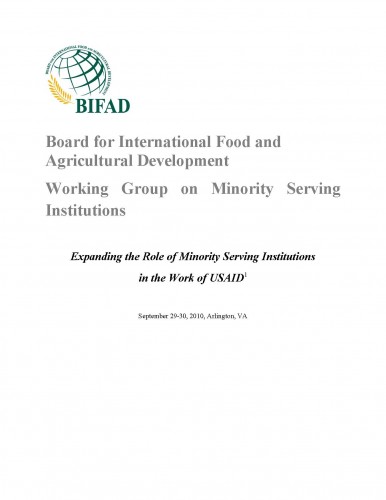 In 2009-2010, efforts were renewed to both broaden and deepen the involvement of Minority Serving Institutions (MSI) in United States Agency for International Development (USAID) agricultural programming, and under the auspices of the Board for International Food and Agricultural Development (BIFAD) an MSI Working Group was formed. Members of the group included representatives from the MSIs, USAID, and the Association of Public and Land-Grant Universities (APLU). The purpose of the working group was to grow a stronger partnership between USAID and the MSIs by identifying recommendations to increase the participation of MSIs in USAID initiatives to increase global food security.

In late September 2010, as a result of Working Group planning, BIFAD support, and APLU implementation, a workshop was organized in Washington, D.C. It was attended by over 30 representatives of the nation’s MSIs to develop a strategy and to identify recommendations for increasing their engagement in USAID programs. Sponsored by BIFAD, the meeting brought together participants from eleven Historically Black Colleges and Universities (HBCUs), eight Tribal Colleges and Universities, and seven Hispanic Serving Colleges and Universities or associations. They were joined by staff members from USAID and the Association of Public and Land-grant Universities (APLU). BIFAD was represented by Dr. William B. DeLauder, President Emeritus of Delaware State University, who introduced and presided over the meeting. USAID leadership was represented by Karen Turner, Director of the Office of Development Partners, under whose auspices BIFAD is located. The workshop allowed education leaders and government officials to share perspectives on the current status and direction of the Title XII Higher Education Collaboration and to highlight the contributions that MSIs can make to international agricultural development efforts.