Leveling the Playing Field:
How Gender Concepts Play Out in Everyday Life

As my third anniversary of joining CP approaches, I increasingly find myself reflecting on how my work has opened my eyes to gender issues and how they manifest themselves in different parts of my life. While at CP I’ve had the opportunity to look at gender issues in food security, biofortification, and family planning programs in locations from Latin America to Sub-Saharan Africa to Asia. The work that CP does is primarily focused on gender integration in the international sphere, so it’s easy for me to consider gender only in the context of far away communities and programs. However, I frequently encounter situations in the context of my life here in Washington, DC that make me stop and think about some of the same concepts I apply in the workplace. 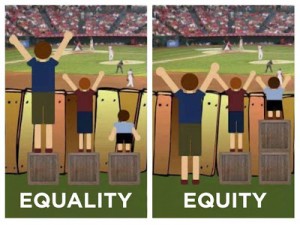 I recently participated in a CP-facilitated training focused on integrating gender in agriculture programs, where participants discussed the differences between gender equity and gender equality. These concepts are often confusing and it can be challenging to recognize the salient differences. Gender equality is likely the more prevalent concept, referring to the ability of men and women to have equal opportunities and life chances. Gender equity is the idea that in order to achieve gender equality, there needs to be fairness in the representation, participation and benefits afforded to the men and women. In some cases, programs aimed at promoting gender equity give people in one gender category an advantage over the other to facilitate their involvement.

So how do these concepts play out in everyday life for a young professional in Washington, DC? It turns out that there is a strikingly clear example right on the playing field.

Like many people in Washington, D.C. I recently began playing soccer with one of the many social leagues that permeate the city. My team has a fairly even balance of men and women, although from what I have seen we are one of the few that does. This is my first season with this league, so I can’t say whether promoting equal participation of men and women has been a persistent concern; however, there are some league rules that suggest it is a priority now.

For example: before our first game, we were told that according to the rules no more than 4 out of 7 players of the same sex may be on the field at any given time. At first glance, I would have put this rule firmly into the gender equality category. There is no clear advantage given to either sex, and both men and women are given a fair opportunity to participate regardless of the total number of players of either sex on a team. However, after a discussion with my coworkers, we determined that this rule is actually promoting gender equity. They key distinction is that men and women are not afforded equal representation on the field, but rather a fair opportunity to play. If the league were to take the rule one step further and mandate that there be an equal number of men and women on the field at a time, then we would be looking at gender equality.

A second gender-specific rule from my league sparked an even livelier debate in the CP office: women receive two points for every goal scored while men receive only one. This time we all agreed that the rule is aimed at promoting gender equity. The debate that ensued questioned whether the rule is either valid or effective, or both. So we put on our gender thinking caps to do some analysis.

In order to understand this rule it is important to consider where it comes from and what inequality it is addressing. There are two possible scenarios for the origin of this rule:

If the rule is based on experience and observations from past seasons then it could be both valid and, assuming more women are participating in the game, effective. If the rule is based on the latter assumption then it may still be a perfectly valid rule based on an invalid perception. If this were a field full of Mia Hamms for example, I’m sure that giving women two points for every goal scored would not be considered fair.

We know that the U.S., although relatively progressive when it comes to gender equality, is not perfect. And yet it still surprised me to find that there were policies aimed at promoting a gender balance in a context as relaxed as a social sports league. So what can we learn from this? Gender analysis shouldn’t stop when we leave the workplace or be pigeonholed to a specific context. There are many scenarios that could benefit from having a gender lens applied, even those as simple as a recreational soccer game. So try it. You might be surprised by what you find.